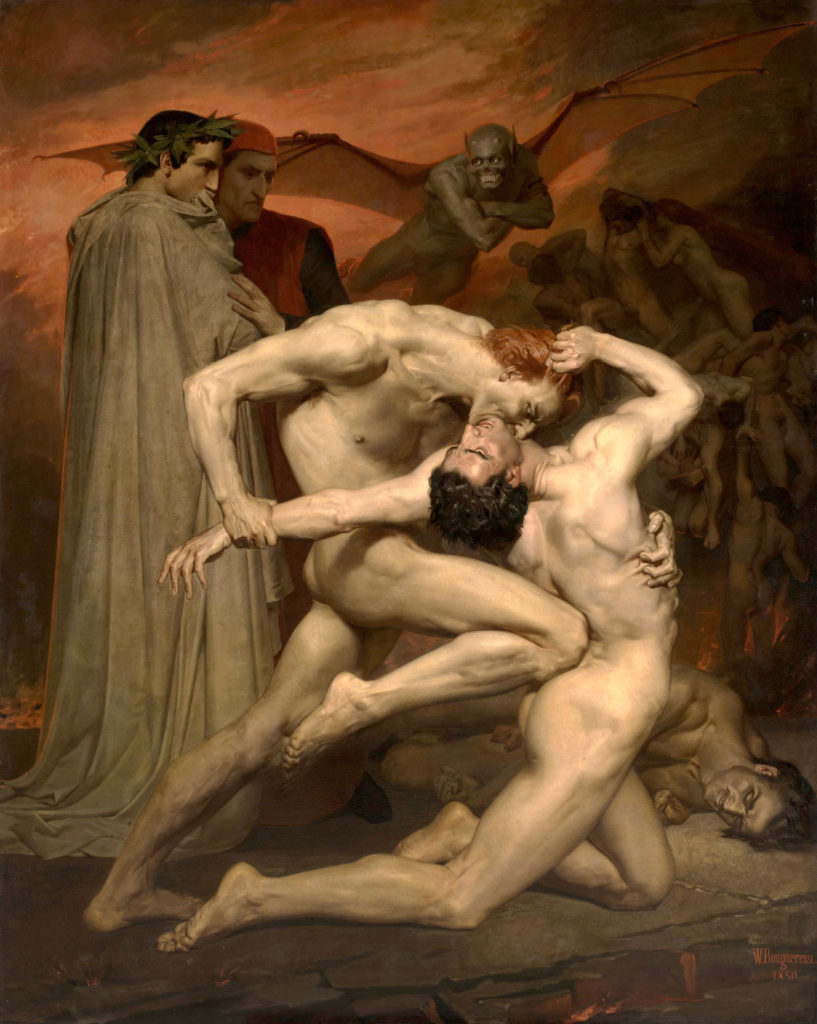 Painting of the month for July 2020

The selection of this artwork as Painting of the Month has been motivated by two occurrences; one good and one terrible.

I’ll start with the good. Since lockdown began I have reinstated my former student status and joined in a weekly online seminar about Dante’s Divine Comedy, on which I took a module for my recent MA course. To reunite (digitally) with friends and re-read the Commedia during this period of isolation has proven to be an immensely rewarding, enjoyable and mentally beneficial fixture in the time vacuum otherwise known as a week. Dante’s epic poem is one of those rare works of literature that offers infinite bounds for exploration and relevant resonances from centuries past, allowing my fellow Commedians and I to do exactly what Dante intended for his readers: to participate with other human beings.

To turn to the other reason for selecting this particular painting, I refer to the 25th May 2020 in Minneapolis. Like almost everyone else around the world, I have experienced a barrage of extreme reactions to the news of the murder of Floyd George; shock, sadness, anger, powerlessness, and disgust to name a few. While the story continues to reverberate through society, the psychological turmoil left in its wake remains unprocessed within many of us. From the start of the COVID-19 pandemic, we have been subjected to forced positive messaging and hashtags promoting solidarity and care for one another (‘we are all in this together’ is one particularly exhausted example), and yet human beings continue to behave in nauseatingly arrogant and grossly corrupt ways. The contrast between what individuals say and do (or should do) is despairingly overwhelming.

Dante and Virgil was painted by William-Adolphe Bouguereau in 1850 and stands out as an abnormality among the artist’s prolific oeuvre, dominated by beautifully idealised (often nude) figures in romanticised scenes from mythology or religion. Long-criticised as sentimental in theme and ‘licked’ finish, Bouguereau’s style reflects his training at the Académie Française which dramatically fell out of favour around the mid-1800s with the dawn of Realism in France. Nonetheless, I have a soft spot for Bouguereau, and to rediscover this Dante-inspired work at this time felt fated.

Inferno is undeniably the most influential of the three cantiche of the Commedia and has proven to be especially inspiring for visual artists through the centuries. This painting is full of all the fiery energy you would expect of an image of Hell. The blazing red backdrop and inclusion of a skull-headed demon with wings categorically locate the setting. A mass of writhing bodies to the right, their sin-laden flesh pulling them down into a burning fissure recalls the damned in Michelangelo’s Last Judgement. Dante and his guiding companion Virgil stand off-centre, witnessing the action taking place in the foreground. Recoiling, Dante puts a hand on Virgil, who in turn reacts by holding a cloaked hand to his mouth, eyes averted. The title of this painting detracts from the focus of the composition and does not elaborate on the action that is taking place at its centre. Two male figures are entwined in a desperate and violent struggle, every muscle of their powerful bodies tensed and stretched, every limb intent on causing pain and damage to the other. This scene is lifted directly from the following passage in Inferno 30:

‘And yet no fury known in Troy or Thebes

was ever seen, to anyone, to strike

so viciously at beast or human limb

as now I saw in two blank, naked shades –

who, racing round that circle, gnashed and gored

as swine do when their pigsty is unbarred.

One got Capocchio. At the very knot

of neck and spine, his tusks sank in. Then round

This happens in the eighth of the nine circles of Hell, which represent increasingly serious sins. The eighth circle is divided into ten malebolge, or ‘evil pockets’ which separate the offences of the inhabiting sinners. These range from those who have committed fraud and simony through to hypocrites, thieves, sowers of discord and falsifiers. As an active political man as well as a poet, Dante held the responsibilities of civic duty and integrity of those in power with the highest regard.

The two ‘naked shades’ are Capocchio, the dark-haired man, and Gianni Schicchi de’Cavalcanti, the redhead. Capocchio is losing the fight, his body wrenched backwards as though he were on a torture wrack. This Sienese man, who presents himself to Dante in the previous canto, was burnt at the stake in 1293 for practising alchemy, a crime which attempted to counterfeit nature for profit. In life, Schicchi was a Florentine knight who assumed the identity of the freshly deceased Buoso Donati by his relatives before they announced his death. The plan had been to rewrite his last will and testament, which left his considerable wealth to a monastery, and instead direct the assets to their own pockets. Schicchi double-crossed the family by claiming the inheritance himself. The fraudulent acts of his life are expressed here in Hell, where he vampirically sucks another’s life for his own gain. The way jaws clamp onto his opponent’s neck and ‘his tusks’ skink into the skin is animalistic, as though about to tear out the throat. With his right arm, he draws his prey closer to him, while his left claws into the ribcage, drawing blood. His right knee forcefully drives into Capocchio’s back. The monumental poses and anatomical detail of the figures are reminiscent of Ancient Greek and Roman sculptures of celebrated wrestlers and pugilists, yet these men are devoid of any humane qualities.

This is a difficult painting to look at, and considering its underlying content it should be. It speaks of the physical violence one human being can conflict on another, if their will is misdirected. Reading Inferno is full of vivid imagery that represents the most transgressive examples of human behaviour that Dante knew of, examples that echo today. In light of recent events, captured and shared with the world instantaneously through technology, this artwork offers many reminders of the physical force that caused the death of Floyd George. Crimes of counterfeiting and abuse of the trust of others are of course serious, but the intent of destroying another human being has to be one of the most malevolent of sins. Théophile Gautier, a writer and art critic contemporary to Bouguereau, wrote that ‘[he] depicts magnificently through muscles, nerves, tendons and teeth, the struggle between the two combatants. There is bitterness and strength in this canvas – strength, a rare quality!’[2] But, I think, the exaggeration and distortion of the human form, while undeniably impressive, expresses an evil, a distortion of the human form that reflects a distortion of the mind and soul within.