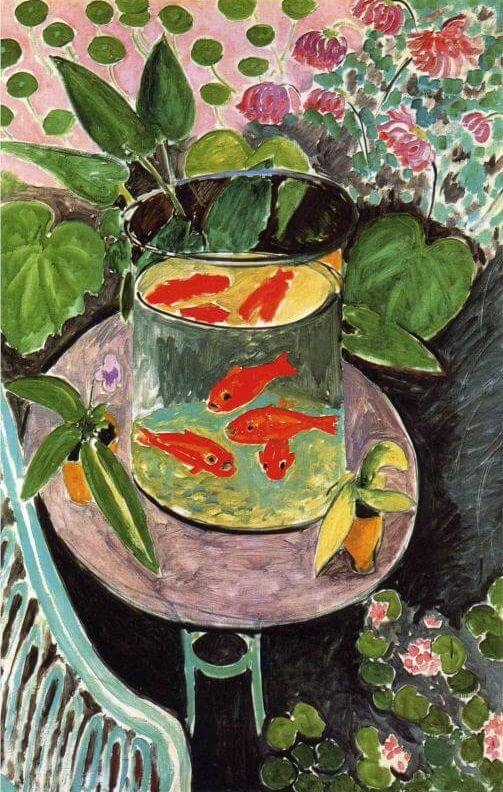 This is a painting that I have wanted to write about for a while now, the reason being a moment of revelatory remembering. Allow me to explain.

As a child at primary school, I recall spending a considerable amount of time sitting outside the first aid room. During the summer months, I suffered from terrible hay fever to the extent that I have memories of staying indoors on hot days while other children played outside. At lunchtime on school days, I would visit the nurse to get my doses of medication. Outside her room was a large wicker chair, above which was a print of a painting. It was only recently, experiencing a rare moment of a distant memory and fact coming together, that I learned what that print was a painting of.

It was Goldfish (1912) by Henri Matisse. While I must confess that I am neither a huge fan of Matisse nor know anything about him, this painting has come to mean something to me. It is something familiar and yet unfamiliar, an anchor of recollection in a childhood mostly forgotten or misremembered.

Henri Matisse (1869-1954) was a French painter, draughtsman, printmaker, collagist, and sculptor, whose influence on the art of the early 20th century is probably only second to Picasso. A key proponent of the Fauve movement, his name calls to mind images of bold, complementary colours and experimental technique that continually evolved throughout his career. While this work was made from the artist’s studio refuge from Paris at Issy-les-Moulineaux, the inspiration behind it is far more exotic. It is said that while visiting Tangier, he witnessed North Africans pausing to stare in wonder at these small metallic orange fish. This experience made such an impression on Matisse that he used goldfish as symbols of mindful tranquillity in several works.

In Chinese culture, goldfish are symbols of fortune and good luck, and Koi in particular feature in their mythology. To our modern minds goldfish are the most ordinary of fish, often the first pet a child is entrusted with. Yet anyone who has kept them may appreciate the mesmerising and soothing effect watching them can have. There is something extraordinary about how their bronze scales shimmer with every fluid movement of their bodies, their papery-thin tails and fins, and their large glassy eyes. I always mystified by the continual mechanical workings of their gulping mouths and fluttering gills. Their aimless yet graceful swimming is entrancing, as they glitter and gleam in their glass tanks.

The perspective in the painting is skewed, as though the refraction of light through the water of the tank has permeated through the surrounding space. Matisse has depicted the fish front on and from above, precariously placing the tank on a slanting tabletop. The leg of the table is seen from a different angle again. A sense of bright, warm, and airy light radiates out of the canvas and nurtures the many plants and flowers that surround the fish tank. Complementary pinks and greens contrast with the fiery red-gold of the fish, who gawp and goggle at us from behind the glass. The arm of a turquoise chair cuts across the bottom left-hand corner of the canvas, welcoming us to rest and watch the fish in this haven of relaxation. Despite the obvious modernity of the painting, the distorted perspective, lack of depth and pushing of everything to the surface recalls the art of the past. Rather than being confusing or inaccessible, I find the painting very open and immersive. The eye is free to roam around and rest upon details, textures and tones. The harmonious colours are pleasing to the eye and mind. Matisse said “I dream of is an art of balance, of purity and serenity, devoid of troubling or depressing subject matter… a soothing, calming influence on the mind, rather like a good armchair that provides relaxation from physical fatigue.”[1]