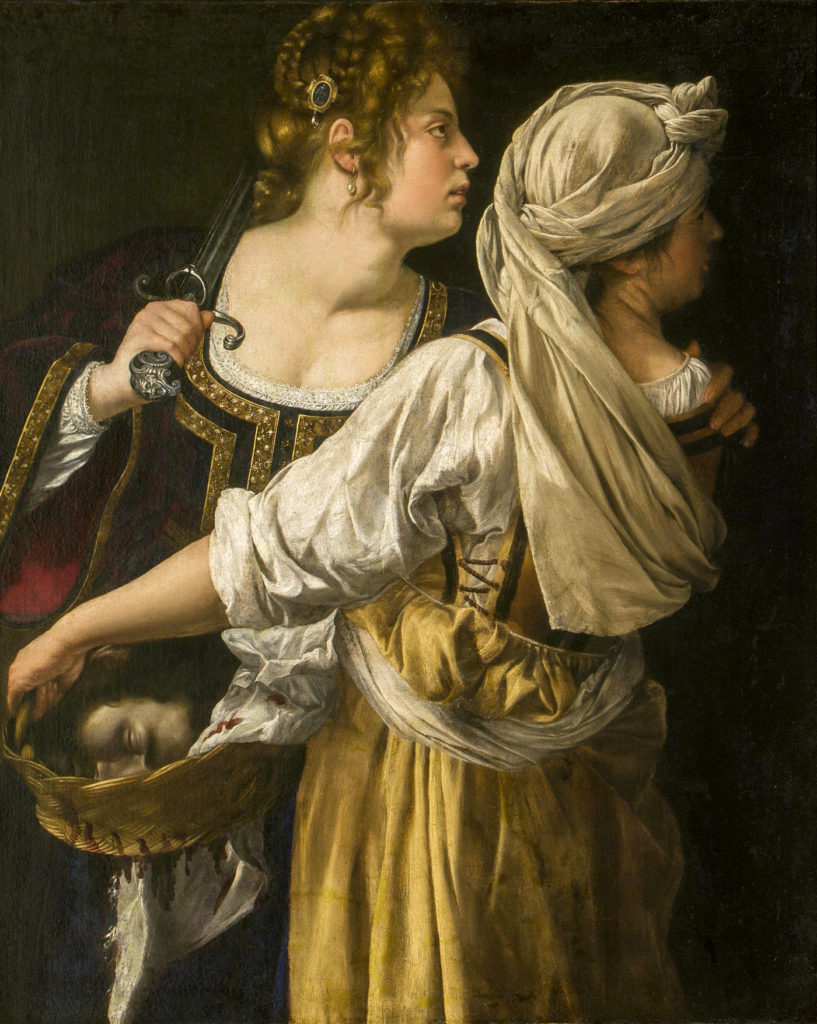 Judith and her Maidservant

If like me, you missed out on seeing the National Gallery’s Artemisia exhibition, you may have consoled yourself with the virtual offerings and brilliant accompanying catalogue. Mourning the loss of missing such a landmark show (the first in the UK dedicated to the artist), I have chosen March’s Painting of the Month to console me. Artemisia Gentileschi’s work is often written about through a feminist lens and translated through her experience as a victim of rape. However, I wish to focus on the biblical subject at the heart of the painting Judith and Her Maidservant (c.1615-17).

The deuterocanonical Book of Judith tells the story of how a Jewish woman saves her besieged city of Bethulia by assassinating the enemy’s leader, the Assyrian General Holofernes. The heroine Judith is a widow, described as ‘beautiful in appearance and very lovely to behold’ (Judith 8:7).[1] Learning that the city’s leaders planned to surrender to the enemy if God did not deliver them within five days, Judith reproached them, asserting that only by maintaining steadfast faith could they overcome their adversaries. Seeing that these rulers of men lacked piety and courage, she took matters into her own hands:

“Listen to me! I will perform a deed that will go down from generation to generation among our descendants. Stand at the city gate tonight to let me pass through with my maid; and within the days you have specified before you will surrender the city to our enemies, the Lord will deliver Israel by my hand.” (Judith 8:32-3)

Before setting out on her mission, Judith prays fervently to God ‘[g]ive to me, a widow, the strong hand to do what I plan. By the deceit of my lips strike down the slave with the prince and the prince with his servant; crush their arrogance by the hand of a woman’ (Judith 9:9-10).[2] She then bathed, fixed her hair and changed her sackcloth dress for alluring and bejewelled finery. Suitably attired and supplied with food, Judith and her maidservant, Abra, leave their home and make for the enemy camp.

Upon being apprehended by Assyrian guards, Judith states that she is fleeing her city before its inevitable defeat, and promises to reveal to their leader how to capture Bethulia easily and without losing any men. Subsequently, Judith is summoned to Holofernes’ tent, where his ‘heart was ravished with her and his passion was aroused, for he had been waiting for an opportunity to seduce her from the day he first saw her’ (Judith 12:16).[3] When alone with the inebriated General, Judith ‘went up to the bedpost near Holofernes’ head, and took down his sword that hung there. She came close to his bed, took hold of the hair of his head, and said, “Give me strength today, O Lord God of Israel!” Then she struck his neck twice with all her might, and cut off his head… she went out and gave Holofernes’ head to her maid, who placed it in her food bag (Judith 13:6-10).[4] The two women return to Bethulia victorious with their prize, Holofernes’ head, which is duly hung from the parapets. Without their great General, the Assyrians were defeated, and Judith’s city was freed.

It is the moment just after Judith 13:10 that Artemisia has captured in paint here, an undescribed yet viable in-between scene inspired by the narrative. Caput bagged, Judith and Abra prepare to leave when they stop in their tracks. Poised as though startled by something off-canvas, the women pause, perhaps hold their breath in trepidation. The scene and its composition has been directly influenced by a painting with the same title by Artemisia’s father, Orazio Gentileschi (1563-1639) from around 1608. As in Orazio’s painting, the two women are drawn close to one another, Judith is front-on while Abra has her back to us. The attention of both is drawn to the right-hand side of the canvas, putting both faces in profile. In Artemisia’s version, the hand of Judith on her maid’s shoulder seems more considered. It is as though a gesture of solidarity and a motion of turning homewards has been transformed into one of hesitation in the face of potential danger. Its placement adds human feeling and realistic drama into the storyline, intensifying the sense of camaraderie between two women who have undertaken a difficult task together. The strong spotlighting against the indiscernibly dark background and the zoomed-in cropping of the figures (the exhibition catalogue explains that since its completion the canvas has been cut) also focuses the viewer on the bond between them. ‘Judith and her Maidservant with the head of Holofernes’ (c. 1608), oil on canvas, National Museum of Art, Architecture and Design, Oslo.

Like Orazio, Artemisia closely observes the rich textures and colours of the clothing of both women. Abra wears a buttery-yellow dress with the sleeves of her white chemise rolled to the elbow, a strikingly more modest ensemble than the rich orange and blue in her father’s interpretation. Unlike Orazio, Artemisia uses swathes of white fabric as a subtle yet effective visual device within the painting. Abra’s white headscarf is wound around her head and cascades down her back, joining another coil of fabric which twists around her waist. This meets the material overflowing from the basket containing the decapitated head, the ends of which are dripped with fresh blood leaking through the weave of the basket. This divides the painting in half diagonally from the top right-hand corner to the bottom left and connects the right side of Abra’s face to that of Holofernes. Bearing in mind that the canvas has been altered, I cannot help but feel drawn to this winding cloth, ambiguous in its start and finish. As with Judith’s gesture, the attention given to a seemingly simple detail instils a sensitive yet deep comprehension of pictorial storytelling.

Judith, who we recall dressed herself up to attract and seduce the enemy, wears a crimson dress trimmed with gold. Her white undershirt is trimmed with lace and the inside of her sleeve shows a flash of blood-red. Now slightly dishevelled, her braided hair is adorned with a cameo, while a pearl hangs from her ear. Pearls typically symbolise purity and innocence, but in early Christian art, the pearl also represented the perfection of God’s creation and His word. Sanctioned by the Lord, Judith does His work fortified with His strength. Judith grips the hilt of Holofernes’ sword with her right hand (the ‘strong hand’ prayed for in Judith 9:9), just used to cut off its owner’s head. I love the way she commands the weapon, appearing confident and comfortable wielding this unfamiliar object. The blade of this instrument of decapitation rests casually on her shoulder, disturbingly close to her own smooth and vulnerable neck. A screaming face adorns the pommel is thought by some scholars to be Medusa, but to my mind, it evokes the expression of its victim pre-execution.

While Orazio provided the template upon which his daughter’s interpretation would be based, Artemisia makes the subject her own. She draws the viewer’s eye and mind on two women in a moment of shared intimacy and peril. The story itself does not elaborate on the relationship between Judith and her partner in crime, but this painting captures something of the imagined rapport between them through a seemingly simple gesture, a touch. Orazio’s figures seem disconnected to me, and I see models posing, not characters telling a story. It might be going too far to say that Artemisia put something of her understanding of female companionship into the painting. But she certainly captures something more nuanced and human from the apocryphal text than her father. Artemisia was around 22 years old when she created this work. She had already painted one Judith Beheading Holofernes (Museo di Capodimonte, 1611-12) and would soon paint another, more dramatic one (Uffizi 1620-21). She would also revisit the aftermath of the slaying, most spectacularly in the version owned by the Detroit Institute of Arts (c.1625-7). In repeatedly returning to and reworking Judith’s heroic tale, Artemisia deepens our comprehension and recognition of the women at the heart of it.