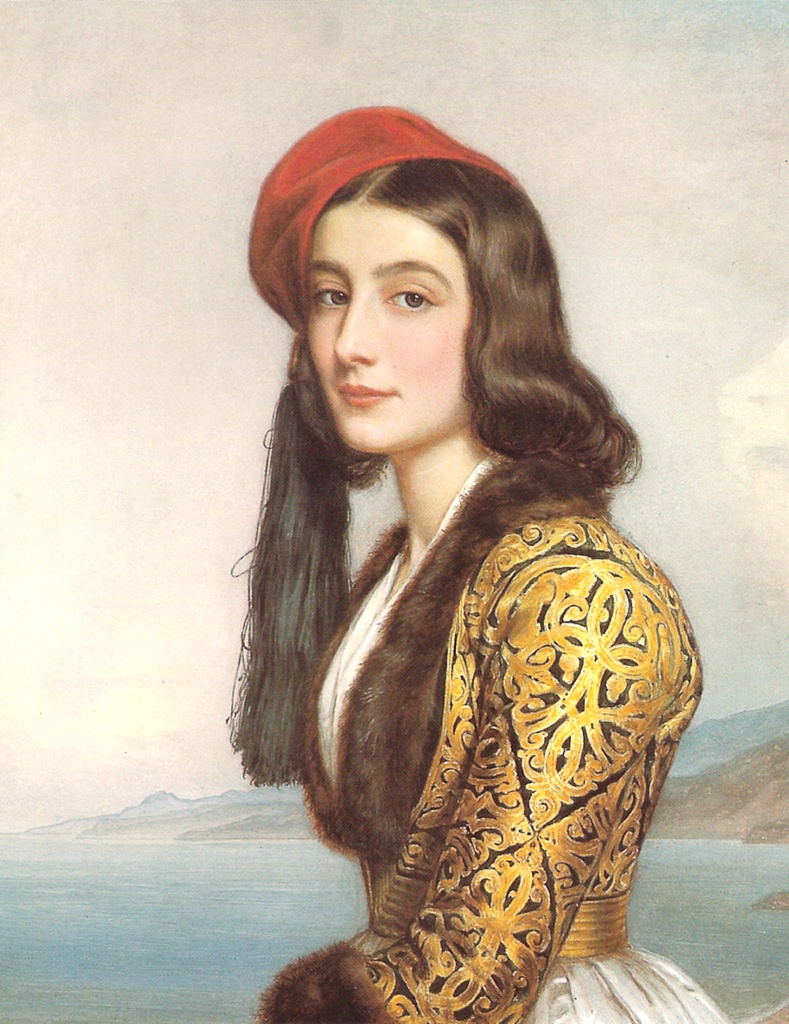 Painting of the month for November 2014

I have chosen this painting for November because since seeing it while aimlessly trawling through Pinterest I have wanted to learn about it. Famous for painting Bavarian kings, emperors, noblewomen, and a grumpy looking Beethoven, Stieler was born into a family of engravers in Mainz, Germany. He showed an early interest in portraiture, and after an apprenticeship he began producing miniatures. At the age of 21 he attended the Academy of Fine Arts in Vienna and was then taken on in François Gérard’s workshop. Stieler’s oeuvre shows an unwavering devotion to the Neoclassical, a style of idealisation and harmony, which endured throughout his career.

As court painter between 1827 and 1850 Stieler was commissioned to create a ‘Gallery of Beauties’ for King Ludwig I of Bavaria’s Nymphenberg Palace. This painting was one of 36. Katerina Botzaris (1820–1872) was the daughter of the Greek general and national hero Markos Botzaris. Descendent of a warrior clan, Botzaris had fought against the Ottomans and was killed in the Greek War of Independence in 1823. Katerina was in the service of the future Queen Amalia of Greece, whose father-in-law, quite neatly, was the commissioner of the Gallery of Beauties. Miss Botzaris was considered a highly eligible young lady throughout the court, and we can see why.

She really is a beauty. Her complexion is glowing and creamy, her cheeks blushed with youth. High arched eyebrows frame a long straight nose and brown heavy-lidded eyes, which look out at us kindly, a light smile drawn at the corners of her mouth. Glossy chestnut hair flows down her neck, blending into the tassel of her jauntily placed hat and the fur collar of her jacket. The gold brocade jacket is fitted, nipped in with a golden waistband, emphasising the feminine shape beneath. A crisp white blouse and the hint of a pleated skirt can be seen, a simple detail which adds light and contrast to the image. Although her costume has something of the Greek military about it (portraits of her father show him in a similar getup) it is an elegant and very flattering outfit. Her employer Queen Amalia (German by birth) had a great impact on fashion during her reign, creating the Amalia dress to integrate her into her new country. This romantic folk-inspired trend melded a ceremoniously embroidered jacket (typically dark blue or claret coloured) over a loose-fitting silk shirt and skirt, with a tasselled fez or soft cap to top off the look. This style of dress became popular at court and endured to become a national costume of Greece.

The landscape behind Katerina shows miles of coast rugged, the blue ocean is tranquil and pale sky is atmospheric, perhaps misty. It gives an overall sense of peace and belonging. Paired with the sitter’s exquisiteness and steady gaze the portrait is one of pride and belonging, both of her country and family name. In 1845 she married Prince George Karatzas. And this is about the extent of the information about Katerina. But we can glean something of the sitter from this painting, it hints at her personality and reputation. It immortalises her beauty, so famed that a rose was later named Rosa Botsaris in her honour. Stieler for his part continued to paint likenesses of beautiful women and men of status across Europe, becoming renowned for his ability to focus on the sitter’s character. Although less well known than his elders Jaques-Louis David and his old tutor Gérard, his works are a perfect example of controlled and romanticised Neoclassical portraiture.