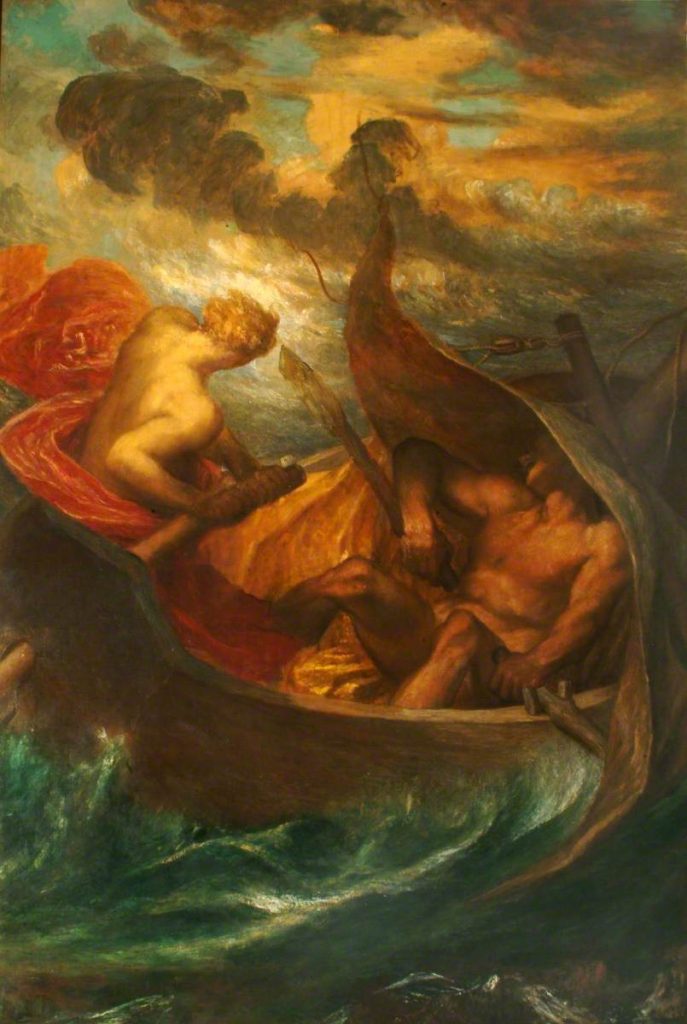 Painting of the month for February 2020

Love Steering the Boat of Humanity

For an artist who did not adhere to any dogmatic faith, many of the works by George Frederic Watts (1817-1904) is saturated in spirituality. Images of life and death, virtue and sin, the earth-bound and the otherworldly through religious and moral subject matter dominate his artistic output and were often utilised to reflect both universal ideas of the eternal as well as socio-political current affairs. This painting is no exception. Upon first viewing of Love Steering the Boat of Humanity (1899-1901) one would be forgiven for seeing only the former of the two layers of meaning. A small wooden boat carrying two passengers is being tossed violently by the waves in the foreground. A threatening sky above bears down on the scene with the palpable weight of a storm. The slumped figure in the back of the boat is Humanity, exhausted and helpless despite his obvious physical strength. Steering the boat is the personification of Love, Humanity’s powerful rescuer, golden-haired and muscular. As the boat is thrown tumultuous waves foaming around the hull, Love struggles to steer the vessel to safety. The dramatic tilt of the boat and the closely-cropped, zoomed-in composition create a sense of inescapable drama. Several preliminary sketches for this painting owned by the gallery show Watts’ creative process to arrive at this powerful arrangement.

Watts’ wife, Mary Seton Watts, described her husband’s work as an ‘endeavour to put into visible form the ideas of the present age.’[1] This painting, seemingly an accessible allegorical scene, the artist is expressing his concerns for contemporary issues, namely the Boer War. The British Empire and other European powers had colonies in South Africa and had been battling for control in the 19th century, striving to expand their territory, exploiting natural resources and enforcing their culture in their colonies. To Watts, who was passionately anti-war and violence of all kind, this must have been humankind at its worst.

Humanity, defeated and almost lifeless, is saved by Love. Under Love’s protection and direction, humankind will endure. Sunlight and blue sky are breaking through the smoky clouds, an unmistakable sign of hope. Humanity cannot master the seas or the storms of life alone, and while suffering and difficulty are guaranteed Love is represented as a constant reliable throughout.