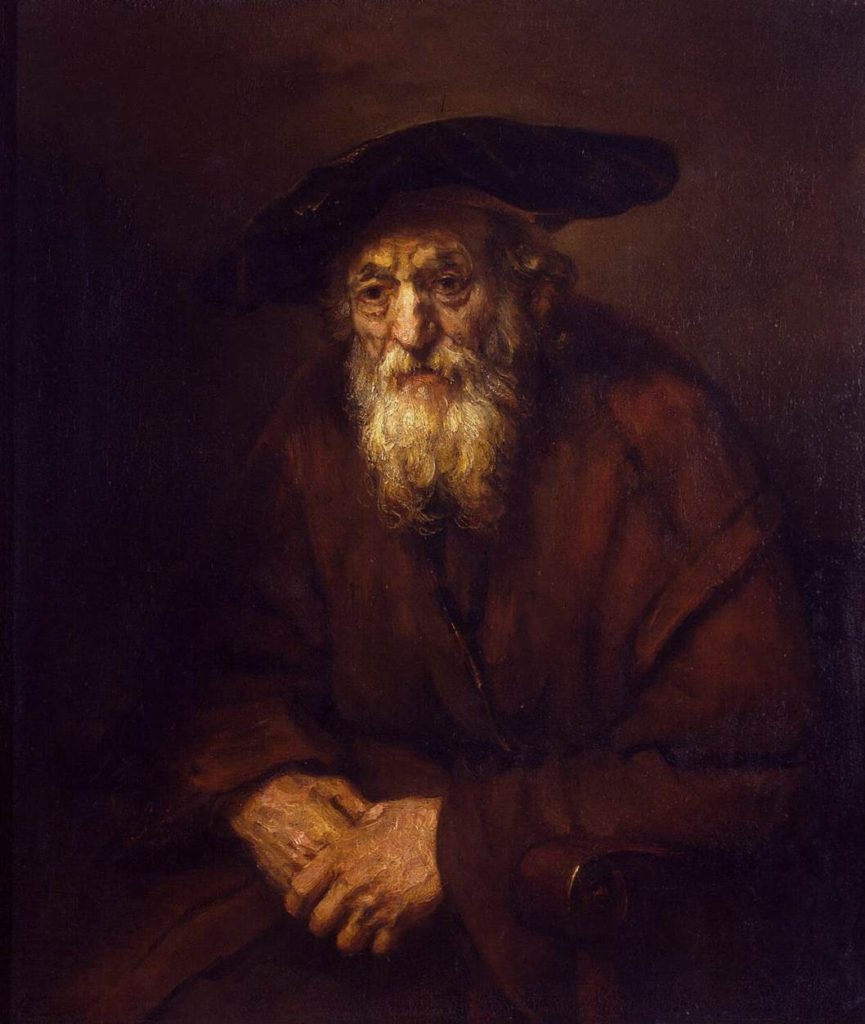 Painting of the month for February 2021

Portrait of an Old Jew

Recently re-reading Shakespeare’s The Merchant of Venice (1596-97) has prompted me to think about Shylock. When I imagine him, I see the sitter in Rembrandt’s Portrait of an Old Jew (1654). Whether I knew the painting or the play first, I cannot say, but the two are inextricable in my mind. Thinking deeply about Shylock and what Shakespeare reveals to us through his words and actions, I (like many others) have felt torn between feelings of sympathy, empathy, anger and disgust towards him, a tangle of emotions that Rembrandt’s painting has helped me to reconcile.

Painted in 1654 this life-size portrait lives in the State Hermitage Museum in St Petersburg. Very little has been written about this anonymous sitter, which the art historian in me happily accepts as an invitation for conjecture. We do know that Rembrandt resided in the Jewish quarter of Amsterdam for much of his life. Here he befriended many fellow residents and painted many of them in his art. A wonderful portrait The Old Rabbi (1665) in the Uffizi is one such example. Rembrandt was also a serial self-portraitist, depicting himself over 70 times in his career. This practised self-scrutiny resulted in an aptitude for visually describe an ageing façade and the condition of his psyche beneath, often with sensitive insight and unflinching honesty. He applied the same perceptive powers to portraying others, capturing so much more than a visual likeness. E. H. Gombrich (one of my art history idols) wrote that ‘in Rembrandt’s great portraits we feel face to face with real people, we sense their warmth, their need for sympathy and also their loneliness and suffering. Those keen and steady eyes we know so well from Rembrandt’s self-portraits must have been able to look straight into the human heart… Like Shakespeare, he seems to have been able to get into the skin of all types of men.’[1]

The skin of the sitter’s face is wrinkled and sagging. His white beard, furrowed brow and hunched posture are indicative of his age. Clasping his large, thick hands, he looks out into the distance. Perhaps his expression is one of a world-weariness, or maybe it reflects a resilient stoicism of a man who has experienced life fully lived; the good and the bad, the joy and the suffering. A spotlight accentuates his facial features, further emphasised by his dark clothing and the shadowy background. Without knowing more what else can we, as a viewer, gain from this painting? Could we step out of our role as an onlooker and try to put ourselves in this man’s position? He is an image created by Rembrandt’s hand, paint on a canvas. Similarly, Shylock is words on paper. But what of the unidentified man’s identity? What of Shylock’s words unsaid and actions unwritten?

Through reflecting deeply on what can be known of Shylock, I came to the uncomfortable realisation that I could be Shylock. I recognise the same pride, inflexibility and desire for revenge that he exhibits. I honestly think I too would demand my pound of flesh, be hell-bent on having my bond rightfully fulfilled. Returning to the Rembrandt, can we get beneath the surface of this portrait and realise something of ourselves?

It is humanity that Rembrandt is concerned with, this shared thing which overrides religious beliefs, cultural differences and even defies time itself. This is why we consider him to be one of the greatest artists of all time, particularly when it comes to portraits. Rembrandt was interested in representing the whole person, not just their outward appearance but their inner human condition. Painter and author Mortimer Menpes wrote of Rembrandt that ‘Life was his province’[2], which applies just as well to Shakespeare. Shared humanity, depicted in all of its different facets, is what we are offered to participate in and learn about by art. We can be put face-to-face with ourselves through encountering other human beings, whether real or fictional. Rembrandt’s painting, like the plays of Shakespeare, can be scrutinised, critiqued and summed up. But by doing so, I think, one does a great disservice to these master artists. Their works are embodied, implicit and unique. To render them disembodied, explicit and general for our common understanding is to miss a significant opportunity to make meaningful personal connections. I’d like to close with another Gombrich quote: ‘[t]o talk cleverly about art is not very difficult… But to look at a picture with fresh eyes and to venture on a voyage of discovery into it is far more difficult but also a much more rewarding task. There is no telling what one might bring home from such a journey.’[3]