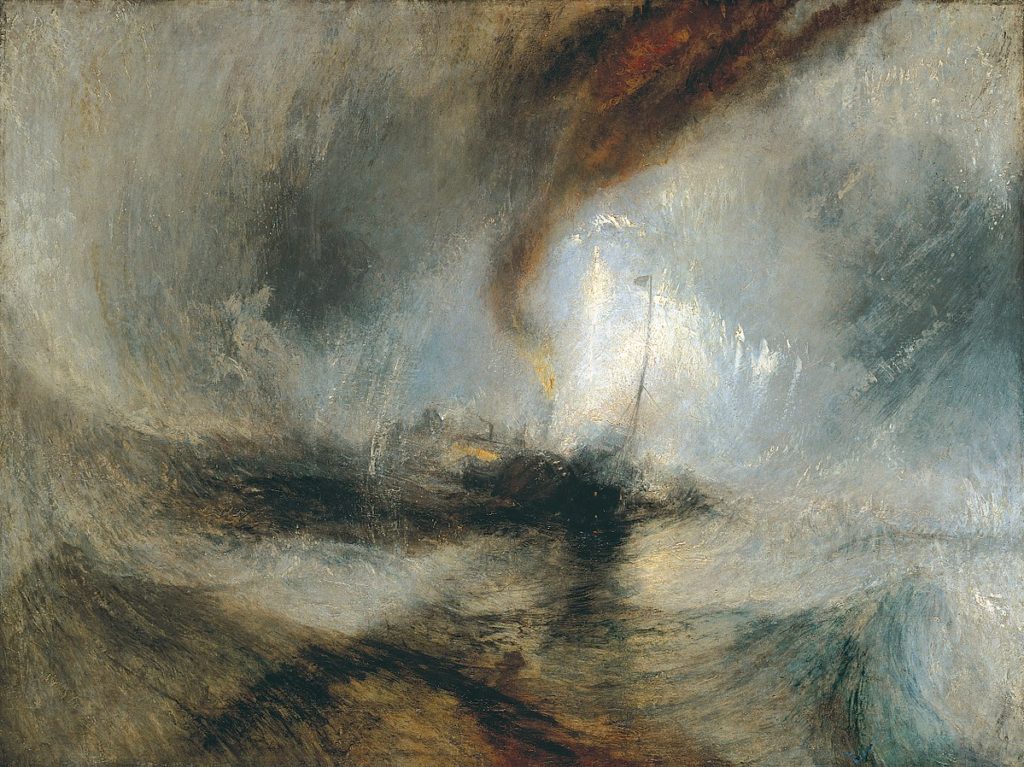 Painting of the month for January 2018

I’m scared of the sea. I don’t like being in it or on it, or even miles in the sky above it. Watching programmes that explore the vast depths and the creatures that live there make me feel ill, and worse still is footage of tankers or container ships in the midst of a raging storm. Even this painting makes me feel uncomfortable, but it appeals to my imagination and compels me to carry on looking.

Joseph Mallord William Turner (1775-1851) loved boats, the weather and water. He explored all three continuously throughout his career. Whether depicting the murky River Thames or the crystal canals of Venice, water gave him a vehicle through which to explore light and the theme of transience. This painting’s full title is Snow Storm – Steam-Boat off a Harbour’s Mouth Making Signals in Shallow Water, and going by the Lead. The Author was in this Storm on the Night the ‘Ariel’ left Harwich, and it was widely criticised when exhibited in 1842. Turner’s staunch defender, John Ruskin, said that it was “one of the very grandest statements of sea-motion, mist and light, that has ever been put on canvas”. Ruskin quotes Turner explaining the painting; “I did not paint it to be understood, but I wished to show what such a scene was like; I got the sailors to lash me to the mast to observe it; I was lashed for four hours, and I did not expect to escape.” While there are no records as to whether the storm actually happened or whether the Ariel existed, there is something to be said for the enduring legend of the tale.

It is hard to comprehend the impact of this painting now, but considering the long-standing traditions of Western art we can begin to see what Turner was doing at this late stage in his life. Conventionally, perspective allows an artist to create convincing space and depth, within which the eye can be guided to help us read a narrative. While Turner had the ability to do these things (he was Professor of Perspective at the Royal Academy for thirty years) nothing is fixed in this work. It is unclear where the sea ends and the weather begins. The waves are blurred by the howling wind and the water is whipped into the air. The steamboat (a relatively modern invention), trapped in the phantasmic swirls of wind and water is pushed to the brink of destruction, perhaps as punishment for challenging the elements. The time and place of the scene is given in the title, but this does not help us to find our place in the chaos. Our eye is blown around the surface of the canvas and down through the eye of the storm, leaving us with nothing to hold onto. The sense the mortal danger is tangible, but simultaneously thrilling and beautiful.

The mid-eighteenth century concept of the sublime can help us understand what Turner experienced and wanted to project onto the viewer. Nature is an uncontrollable, wild force but it is also poetic and awe-inspiring. Politician and philosopher Edmund Burke published his Philosophical Enquiry into the Origin of our Ideas of the Sublime and Beautiful in 1752, and it was a key to forming ideas of beauty as a psychologically and physiologically stirring thing. In painting it often manifested in images of the unharnessed power and immeasurable size of the nature, at the mercy of which we humans are minuscule and helpless. Burke wrote that terror is “the ruling principle of the sublime”. Poets like Wordsworth, Coleridge and Byron used words to capture it, just as Turner does visually with works such as this. It is both apocalyptic and fantastical, a tangle of darkness and light. Turner was a Romantic, but he understood the science of weather and followed the meteorological discoveries of his age with keen interest. Combining his knowledge with artistic creativity allowed him to create visions that stirred the sensations as well as the imagination.

Perhaps Turner’s physical process of painting this mirrored his experience of being there. In the thick, raw layers of paint we can sense the movement and effort with which he worked. I imagine him like a conductor before an orchestra, sweeping his arms before the canvas, swelling the paint to a glaring crescendo of light. His contemporaries ridiculed him for painting “soapsuds and whitewash”. According to Ruskin, Turner said that “…no one had any business to like the picture”, that he had recorded the scene because he wanted to and felt he ought to. As a young man he was obsessed with Arcadian landscapes and classicised themes, but as he matured his art became less controlled and more impulsive, getting to the heart of what mattered most to him.