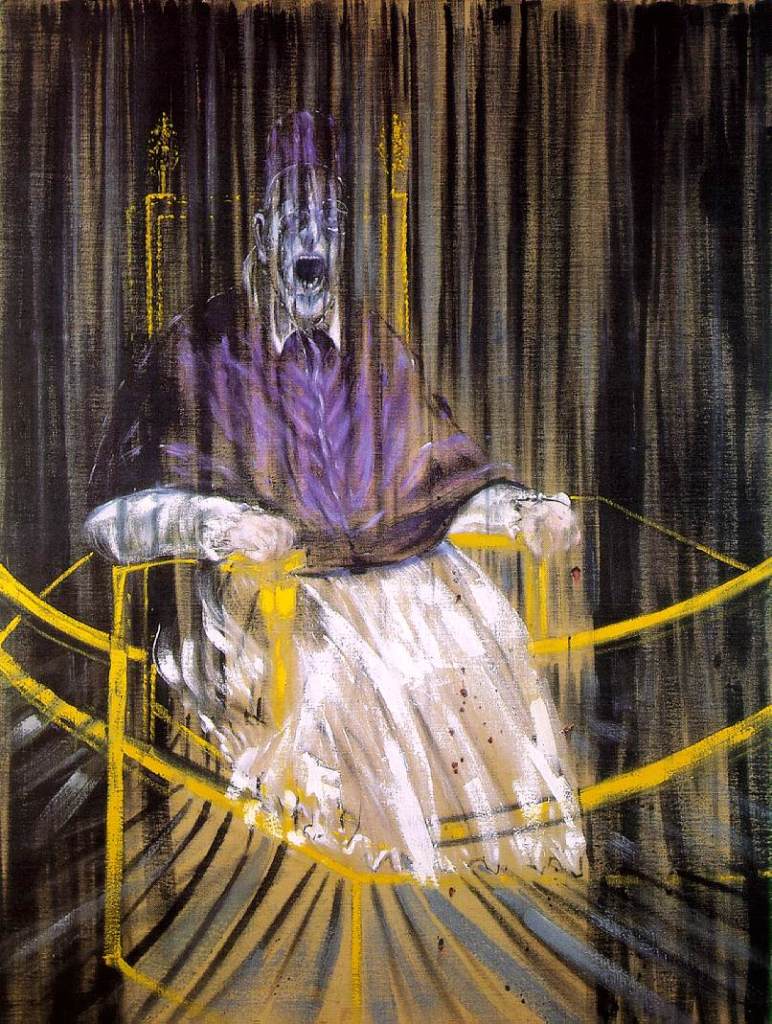 Painting of the month for March 2015

Francis Bacon (1909 – 1992) is one of the few modern artists that I like, or rather the most modern. The main reason is that the many years ago that I was an art student I was inspired by his style of painting and his weird nightmarish visions. This particular painting is a favourite, which I suppose is quite uncharacteristic as I am very protective of the Old Masters. Aside from the obvious visual connections between this study and Velazquez‘s Portrait of Pope Innocent X (c.1650) they have very little else in common. In fact Bacon’s study is very far removed from any conventions of narrative or portraiture. In the famous David Sylvester interview with Bacon the artist confessed that most of his art was “accidental”, that what he initially visualised would rarely become the finished work. Bacon spent 20 years studying Velazquez’s Pope Innocent X, poring over black and white reproductions in textbooks. He highly respected the Spanish master and thought his painting “miraculous”, but when visiting Rome in 1954 he didn’t bother to see this painting in the flesh at the at the Doria Pamphilj Gallery. After spending so long working on the subject Bacon disregarded it as “silly” and a waste of time.  He often destroyed his canvases through frustration and clogging after the working and reworking of paint. Considering this the pages of scholarly conjecture written about his Pope Innocent works seems meaningless.

Contrary to a traditional portrait the viewer is made to feel ill at ease. I can’t really say what it is specifically that I like about this painting. When I look at it the principal feeling I get is pain, that of a mental frustration, perhaps one of insanity. It is certainly not a positive image, yet is enigmatic which makes it hard to avert your eyes. A lot of the ambiguity is due to the fact that we cannot read his eyes. The skeletal look of his head and the rigidity of his pose strongly emphasise his scream, the only suggested element of movement or life. His jaw is open wide which exaggerates the length of his face, already elongated by the height of his camauro hat, the purple colour leaks into his face which gives it a corpse-like quality. Traditionally purple clothes were reserved for the royal due to the rarity and cost of the pigment. The fact that Bacon only saw the painting in black and white meant that the colours are completely of his own choosing. The yellow/gold boxy outline of the papal throne and the way the hands grip on the armrests remind me of an electric chair. In contrast Velazquez’s Pope sits confidently and relaxed, the epitome of power and authority. The sketchy lines around the Pope suggest a barrier of some kind and further add to the feeling of confinement, but also that of something of value on display, untouchable and protected. The transparent skirts of Pope Innocent’s gown seem to flow over the lines, which I think add a spectral feel. There is little solidity in the painting, the stark blackness of the background give the colours an electric quality. The lines that run down and out of the bottom of the surface of the canvas evoke a sensation of tension, perhaps caused by the noise of the scream. We are exposed to the darkness and left in it.

Art historians have found many things to write about in Bacon’s work, Fascism and Freudian themes crop up a lot. Certainly the horror of World War would have still been fresh in the minds of the people at the time of his Pope paintings. It is often stated that this particular image reflects Bacon’s feelings on Catholicism. He was a staunch Atheist but was brought up in Ireland with the traditions of mass and confession. Later in life his reputation as a drinker, a gambler and a homosexual preceded him, and an inner struggle to confirm identity and consolidate religion has been read into his oeuvre. Many of his works have religious titles but he denied any iconographic meaning. For him Velazquez provided a starting point, a format and platform to open up another level of communication; one of emotion. This is a very dark and nihilistic image, one that stays in your mind. It is sensational in the best of worst ways. The fact that Bacon ‘declined’ his nomination to the Royal Academy of Arts shows how anti-establishment he was, a title of honour and prestige was just not what he was about. He was doing something unique, and all he needed was the masters that inspired him and his own genius. Other than Velazquez Bacon was inspired by Michelangelo, Van Gogh, and Picasso. But in comparison I find Bacon more…real, for want of a better word; more visceral and relatable. His paintings are subjects stripped to the core, no pomp or detail for distraction, they are pure unadulterated truth. And although that can be unnerving and unattractive, I like it.