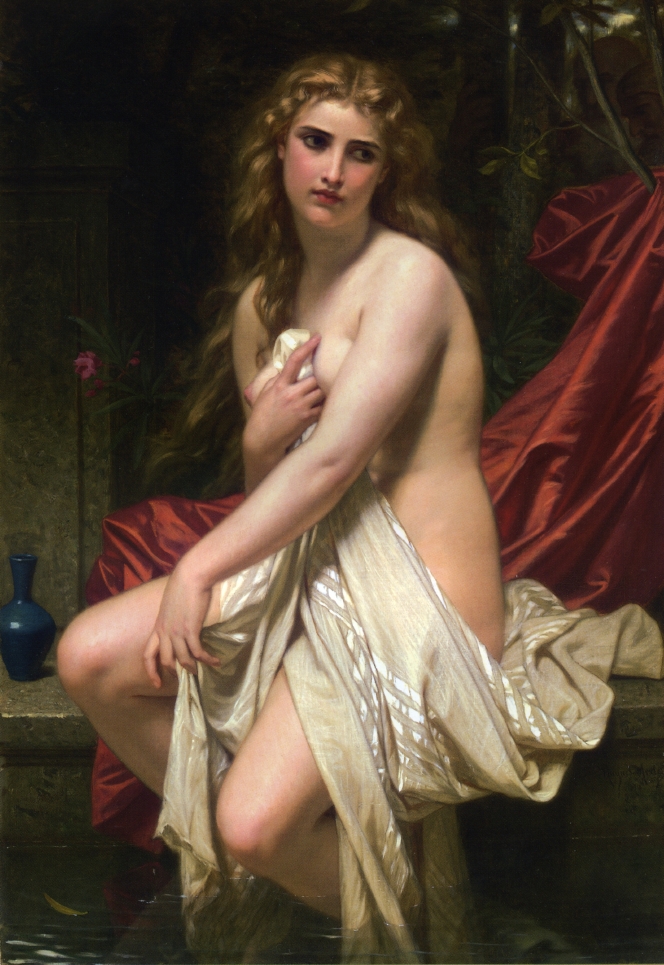 Painting of the month for November 2017

Susannah at her Bath

When I first discover a musician or band I seek out their entire back catalogue. I apply the same obsessiveness to artists, and such is the case with French painter Hughes Merle (1823-1881). Though he is often criticised as being sentimental, I find that his interpretations of literary and mythological scenes give much more than might first meet the eye. Susannah at her Bath was painted in 1847, and depicts the biblical character who was accosted by two men while bathing in her garden. They proposition her; she can submit to their lust or be accused and tried for adultery. Refusing to submit to blackmail, the men put her on trial, and she was declared guilty and sentenced to death. But in the usual timely manner of a hero, Daniel intervenes to reveal the truth and save the virtuous damsel.

Unlike the usual dramatic depictions of this scene in art (Artemisia Gentileschi‘s version from 1610 immediately springs to mind), Merle presents Susannah in a state of peaceful reverie, oblivious to the approaching danger. With her assailant’s threatening presence pushed into the background, we are allowed to focus on Susannah before the story unfolds. In contrast to what the leering men see, we are shown her innocence and pure beauty. While she appears vulnerable we know from the story that she is strong in virtue and will power, qualities that will ultimately result in her legend. With the detail of the narrative known to the viewer, the artist can do what he does best; create a masterfully composed, highly polished and beautiful painting.

Susannah is an ideal beauty, with a curvaceous body, peachy skin and rippling golden hair. Her face is flushed, perhaps in modesty or from her bath. I love her strong dark eyebrows, long straight nose and rose-bud lips, emphasised by the flower that hides in her shadow. She glances away from us as she pulls at the cloth to cover herself. This is a traditional symbol of the story, as is the ledge on which she sits at the edge of her bath. She is very much the focus of the story, but not as a victim or temptress. The swathe of red behind her leads our eye to the impending danger, but my eye always comes back to her. I think she represents innocence and integrity, values that are reflected in her physicality. So while this is at first glance an idealised and romanticised allegory, there is so much more to it than banal sentimentality.