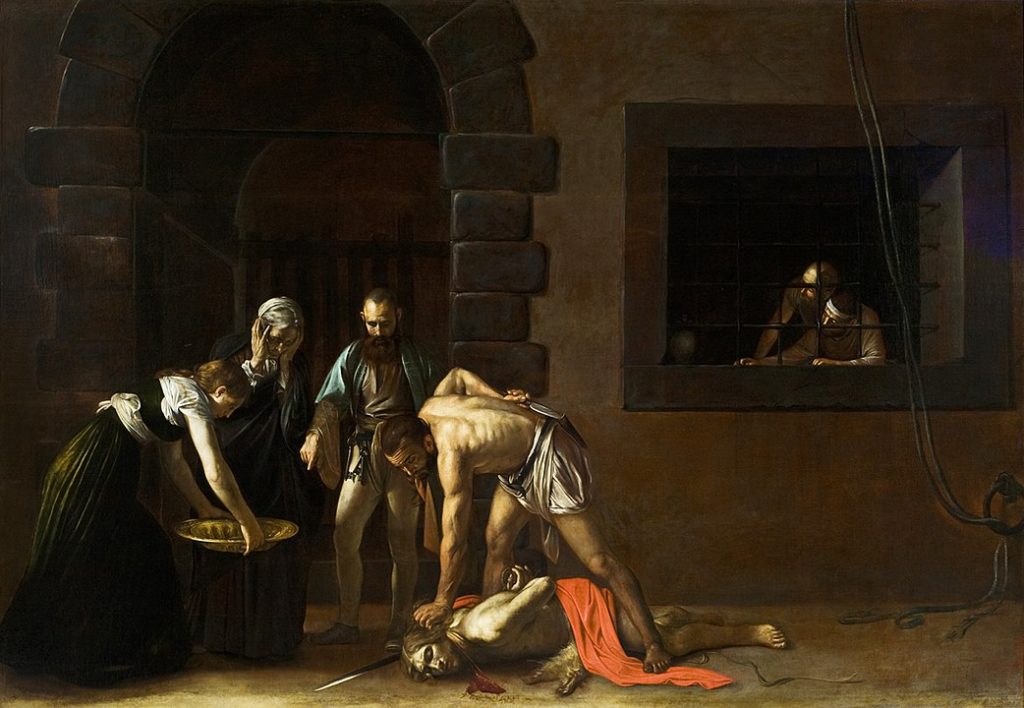 Painting of the month for January 2020

The Beheading of St. John the Baptist

The Beheading of St. John the Baptist by Michelangelo Merisi da Caravaggio stands out from all preceding depictions of the scene in the history of art. It pauses on a strikingly specific moment; one in which John’s head is not fully severed from his body. The emphasis on the explicit details of the act of his killing is often read as a result of Caravaggio’s personal experience of violence, but I think a close examination may offer a deeper understanding and appreciation of the painting.

The Bible does not provide any great detail about the death of John the Baptist. The Gospel of Luke (3:19-20) merely states that Herod Antipas imprisoned and decollated John for criticising his adulterous relations with his brother’s wife, Herodias. Both Mark (6:17-28) and Matthew (14:3-11) add that Herod feared the Baptist and was reluctant to kill him and that the beheading happened in prison during a feast. Often a source of inspiration for artists because of its more descriptive nature, even The Golden Legend also glosses over the details, stating sketchily that ‘…the headsman is dispatched, John loses his head, the head is given to the daughter and presented by the daughter to her adulterous mother.’[1] Early traditions in Italian church imagery establish the event within a larger narrative, for example in fresco cycles or predelle that depict scenes from John’s life. These often present a sort of ‘before and after’ illustration of the event, initially showing the Baptist in prison about to be executed, and subsequently the presentation of his head to Salome or her mother Herodias. Frequently, architectural details such as arches and crenellated walls separate the scene of the murder from Herod’s feast. By excluding the act of beheading and the decapitated body the viewer is perhaps deterred from of dwelling on these aspects. In this painting, Caravaggio deliberately turns his imagination to them.

Caravaggio’s The Beheading of St. John the Baptist was probably begun in the first half of 1608 and is his largest work by a considerable amount. While the action dominates just half of the canvas the physicality of the Baptist’s killing dominates the whole. With John’s head still partially attached, his body almost appears as if whole, reinforcing the totality of his martyrdom and elaborating on the familiar symbol of his severed head. Having cut through most of the Baptist’s neck with the discarded sword, the executioner reaches to his belt for a knife to finish the job. With a fistful of hair, he pulls the at victim’s head in preparation for severing it from the last grisly sinews. The blood that spurts from John’s neck onto the ground provides the ink for Caravaggio’s only signature. When seen in situ the spilt blood of the Baptist’s martyrdom connects directly to the altar table below, an analogous sign to the sacrifice and covenant of Christ’s blood in the Eucharist. We know that Caravaggio was no stranger to a swordfight (though as far as we know he never attempted to remove a human head) but the gruelling mechanics of killing a man would have been more familiar to the Knights of the Order of St. John, in whose chapel this altar painting is found.

Subtle reworkings of traditional iconography in this painting require the viewer’s attention. The customary reed cross has been replaced by the sword that was used to behead John, its crossed hilt just hidden from sight. The rope which binds his wrists meanders into the foreground, mimicking the banderol that is often used to link the Baptist to Christ by testifying ‘Ecce Agnus Dei.’ The binding also alludes to both religious images of the sacrificial lamb and traditional Northern Italian paintings of animals in kitchens or butcher shops. The legs of his animal fur protrude from beneath the swathe of fabric and mirror his own lifeless legs, emphasising the slaughter that is taking place. John’s iconic pointing right forefinger relaxes into a curve as life drains from his body. His habitual red cloak winds around his right shoulder, across his back and into the foreground to form a slick of red, creating a visual counterpoint to the pool of blood.  Caravaggio handles these meaningful symbols with a realistic simplicity that is powerfully evocative but do not distract from the scene at hand.

A group of figures gather around the Baptist’s body and all heads turn towards action. On the left hand-side Salome, bends down with a serving dish in readiness to receive the head. The golden salver hints to the feast that is taking place simultaneously, but also acts as a substitute for a halo, a sign to John’s imminent sainthood. An old woman stands alongside her, looking on with dismay as she clutches her head in what is perhaps an involuntary gesture. She also provides a stark contrast of age, beauty and emotion to her younger companion – a device often used by Caravaggio. Beside her, the prison guard points to the plate, a grim profanation of John’s right arm which baptised Christ and always pointed towards Him and salvation. The guard’s finger leads our eye to the platter and back to the head of the Baptist, thereby returning the focus to the killing. Two men strain their necks from the jail window on the right to witness the execution, a morbid but realistic observation of human behaviour.

Caravaggio contradicts the Gospel accounts by setting the scene outside of the prison. Some art historians have speculated that he may have taken inspiration from the imposing walls and rusticated arches in the courtyard of the Grand Master’s Palace in Valletta. The bleak, unceremonious stage and the brutality of the Baptist’s execution are balanced by the restrained colour and the monumental classicism of the posed figures paused in action. An earthy-coloured stone wall replaces John’s wilderness home. The broken slats of a gate that can be seen through the gloomy archway perhaps allude to trees, their crossed construction could be seen as a premonition of Christ’s future crucifix. The dominating brown tonality is a result of exposed ground, an unconventional artistic decision that was criticised by some of Caravaggio’s contemporaries for resembling an abbozzo, not a finished oil painting. Giovanni Pietro Bellori wrote that ‘[i]n this work Caravaggio used all the force of his brush, working with such intensity that he left the priming of the canvas show through in half-tones.’[2] Considering the prestige of the patron and relative stability of the artist’s career under the Knight’s protection in Malta it seems more likely that the technique is an expression of confidence and style, the loose and less prescriptive brushwork being a prevailing feature of his last works.

Light is significant to John the Baptist’s life, within Caravaggio’s work and religious art more generally. The Bible refers to John several times in reference to divine light; ‘There was a man sent from God whose name was John. He came as a witness to testify concerning that light, so that through him all might believe. He himself was not the light; he came only as a witness to the light.’ (John 1:6-8)[3]. ‘He was a burning and shining lamp’ (John 5:35).[4] Light illuminates, reveals, blesses and renews. Just as Christ’s baptism by John officially began his ministry, spiritual and moral purification was also demanded by Order before initiation. As a model of faith and obedience, the Baptist can be seen as a vessel containing and radiating divine light, and a beacon on the path to God. While his role is diminutive to that of Jesus, in death he too is an inextinguishable flame. His pale but luminous skin and serene face recalls images of Christ’s flagellation and crucifixion. Chiaroscuro, a term with which Caravaggio’s name is now synonymous, is the ideal conduit to communicate John’s channelling of sacred light in order to overcome the darkness of sin, damnation, and mortality that we all face.

Caravaggio has reinterpreted the Baptist’s typical attributes in a sophisticated and sensitive manner, using realistic detail to tell the story his way. The exclusion of haloes and angels does not make the image less holy. Rather the very earth-bound naturalism of the painting makes a powerful impact that focusses the viewer’s experience on the Baptist’s life, but, and I think more importantly, shows us that John’s world and ours are one and the same. John’s role as a Baptiser was to prepare the people for God, to be a guiding light and illuminate their journey, and so those who sought to extinguish John’s light are the ones that are truly lifeless. In deviating from the thematic tradition, Caravaggio has contributed to it, adding another layer to the artistic representation of the subject in art that was to become widely influential to a new generation of artists.