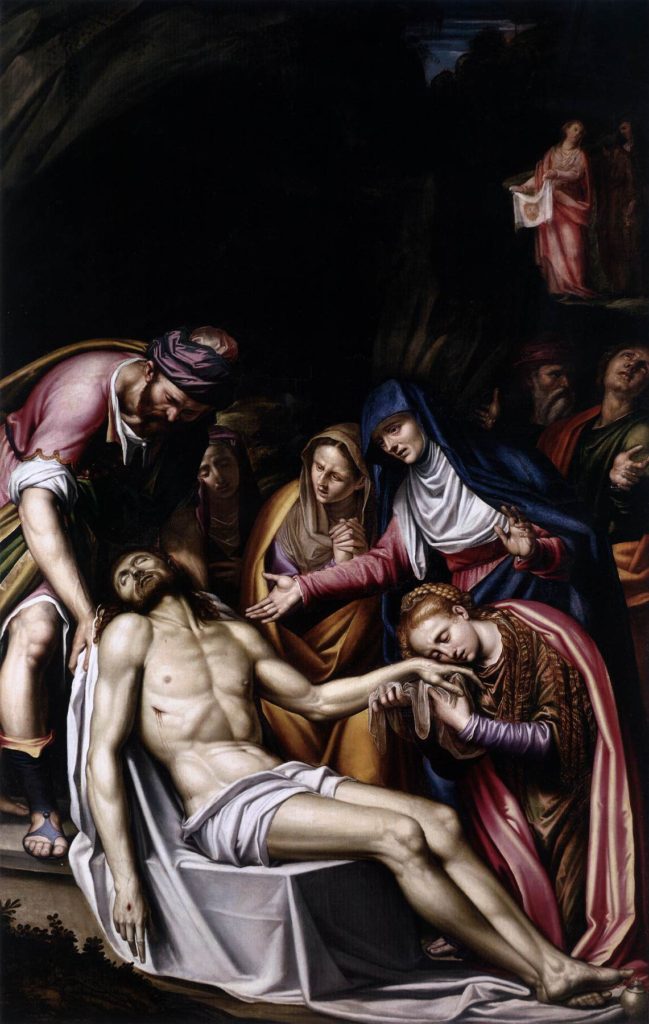 Painting of the month for December 2020

The Deposition of Christ

Although Simone Peterzano (c.1535-c.1596) is most commonly encountered as the artist to whom a teenage Caravaggio was apprenticed, he was an esteemed painter in his time and, I think, worthy of more attention than is given to him. Supposedly a pupil of fellow Venetian Titian [1], Peterzano was a favourite of the formidable Carlo Borromeo, Archbishop of Milan in the era of The Council of Trent (1546-63).

Without getting too carried away with the Council’s decrees on religious art, a summary may prove useful before turning to the painting in question. In 1517, Martin Luther publicly published his ninety-five theses, openly criticising the corruption and materialism of the Papacy. As a counter to Luther’s criticisms, the Council of Trent was organised to reassert the authority of the Catholic Church, while also taking the opportunity to reform itself from within. At the twenty-fifth and final meeting in December of 1563, the matter of images was addressed briefly and unequivocally by the Council members in attendance – Borromeo among them.

Prior to the Council of Trent, much of the art commissioned by the Church had lost its core focus and responsibility. Artists working for the Pope (Michelangelo, for example) often sacrificed sanctity for realistic or individualistic images of religious matter, prioritising an expression creative genius over depictions of scripture and doctrine. With the High Renaissance’s evolution into the Maniera style, which forfeited a sense of natural representation for creative purposes. In hiring the celebrity artists of the age, the true purpose and message of Catholic art had been lost. Inappropriate nudity, sensuality, and even eroticism, in religious painting was not unusual. The Council addressed this by reinforcing its approval of religious imagery as a tool to teach and inspire devotion, setting out new rules to regain control of commissions and asserting its influence to actively enforce them so as to create an appropriate, more unified visual language.

It was decreed that the commissioning church had a responsibility to assure that:

‘…every superstition shall be removed, all filthy lucre be abolished, … all lasciviousness be avoided; in such wise that figures shall not be painted or adorned with a wantonness of beauty… let so great care and diligence be used by bishops touching these matters, as that there appear nothing disorderly, or unbecomingly or confusedly arranged, nothing profane, nothing indecorous.’[2]

Art, first and foremost, had a purpose; to ensure that…

‘the people are instructed, and strengthened in remembering, and continually reflecting on the articles of faith; as also that great profit is derived from all sacred images… because the miracles of God through the means of the saints, and their salutary examples, are set before the eyes of the faithful; that so for those things they may give God thanks; may order their own life and manners in imitation of the saints; and may be excited to adore and love God, and to cultivate piety.’[3]

In short, the objective of Catholic art in churches was threefold: to instruct the congregant in Catholic doctrine; to inspire a deep faith-strengthening piety; and to impress a memorable image on the mind, so as to be a reminder of the above.

The Deposition of Christ (1583-4) had originally been painted for the church of Santa Maria della Scala in Venice, but was moved to San Fedele in Milan when the church was destroyed in 1776, replaced by La Scala theatre. This relocation neatly reconnects Peterzano with Borromeo, which the latter would surely have approved of. San Fedele was the Archbishop’s prototypical post-Trent church, one that was to be an example to all others. The Deposition is a large altar painting, measuring 290 x 185 cm. Centre stage is Christ’s crucified body, placed diagonally across the foreground of the bottom half of the canvas. As Nicodemus lowers him carefully to a stone step, his head lolls back lifelessly. The skin of his foreshortened face and lithe, muscular body is as pale as the stone it is being laid upon. Swathed in her characteristic bright red, Mary Magdalene kneels at his feet, holding his hand to her face with a gauzy veil she anoints his wound with her tears. Her attributional ointment jar is placed in the bottom right-hand corner. Above her, the Virgin Mary approaches with her arms outstretched in supplication, moving forward as if to scoop up her son in an embrace. Her face is distraught, eyes puffy from crying. Other mourning figures surround the group, including Mary of Cleophas and the Apostle John, the vivid tones of their clothes contrasting with the cold rocky landscape beyond.

Thinking back to the three demands of Tridentine art, we can see how Peterzano has fulfilled all requirements. Firstly, the subject matter is derived from canonical Gospel accounts following on from Christ’s crucifixion. Any good churchgoing Catholic would know the story, recognise the characters and therefore be able to read the painting easily. Thematically, the painting is Christocentric, which conveniently tackles another Protestant criticism, that of the invocation of Saints. Secondly, Peterzano literally illuminates the emotion of the story, using strong chiaroscuro to highlight Jesus’ body and the faces of his grief-stricken mourners. Paused at the zenith of their emotional reactions, one can almost hear their lamentations. Christ’s limp right hand and feet in the foreground are almost within reach, involving the onlooker in the scene and inviting participation. Ticking the third box for Tridentine art, the emotional intensity of the painting is balanced by a simple yet striking composition, creating an image that would surely be hard to forget once seen.

One thing worth noting is the inclusion of Saint Veronica in the top right-hand corner. She stands below a slice of unsettled sky, holding out a white cloth impressed with Jesus’ face. As she was not present at the deposition or entombment of Christ, we might question her presence here. Veronica’s story is Apocryphal, featured in the Gospel of Nicodemus among others. She is said to have met Jesus on the Via Dolorosa to Calvary, where seeing him struggle with his cross, she offered him her veil to wipe his face of blood and sweat. A direct line can be traced from the face on the veil to that of Christ himself, connecting the scene at hand to the larger scriptural narrative of the Stations of the Cross, of which the entombment is the last.

Peterzano demonstrates an earthy naturalism in this monumental altar painting, typical of Northern Italian traditions. The portrayal of real human emotion and the intimacy of the scene feel tangible and accessible. Yet there is also an austerity and cleanliness to it that is not quite fully natural or human. The perfect, sumptuously jewel-toned clothing of the figures show an influence of Venetian painters such as Veronese and Tintoretto. There is only a hint of blood around Christ’s wounds, and the landscape is not unspoiled by dirt or rough textures. Art historian Giulio Bora writes that by ‘combining a fundamental simplicity with a strained devotional tension’[4] is what made Peterzano a successful painter in Borromeo’s time. Peterzano was able to work creatively within the constraints of the revitalised regulations of art, earning the respect and approval of his employers but not eternal fame.