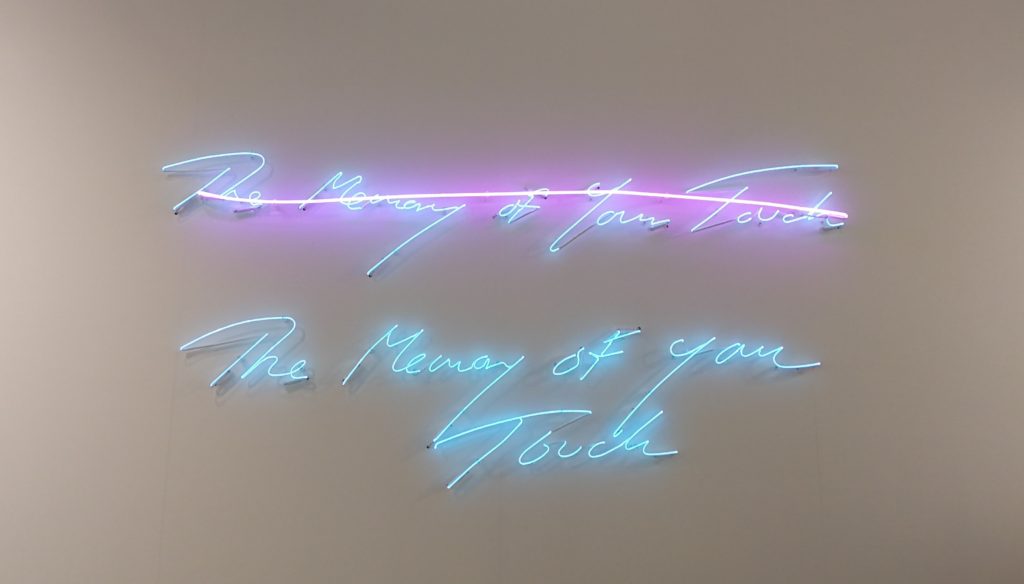 Painting of the month for June 2020

The Memory of Your Touch

This month’s Painting of the Month (which is happily not a painting) has been selected and written by Anne Abouchar. Follow her on Instagram @mylondonpassion.

I am delighted to be writing something for this wonderful blog. I admit, however, my preferences in art sit solidly in the 20th and 21st centuries. At times, these contemporary pieces need a little more time to unknot, yet I believe they can be generous with their meanings. I find myself turning to art again and again to find a way to express how I feel in these strange and unprecedented circumstances.  So much of what we took for granted as part of normal life has changed, none more so than the permission of touch.

The contemporary artist, Tracey Emin, has long worked in neon, writing phrases in her own handwriting that are often full of longing and love. In 2017, following the death of her mother, she made two; ‘The Memory of Your Touch’ neons for a show of the same title. The first has the words in blue set out on one line. While it certainly offers the viewer a sense of longing, the second, larger version is the one I wish to share. It is unambiguous in its heartbreak. The words, written in pale blue, over one line: ‘The Memory of Your Touch’ are struck through with pink as if to say I don’t want this memory anymore. It is too painful. Or maybe worse, I don’t remember anymore. I have lost the memory of your touch, despite all best efforts to the contrary.

The words are written again, in a more vibrant shade of blue, over two lines, giving the word ‘Touch’ its own space below the others. This ‘Touch’ is slightly larger in size, however, the word ‘your’ has been changed from uppercase in the crossed-out version to lowercase. The ‘Touch’ is stronger, but the ‘you’ of ‘your’ is diminished. It is still a touch, but is it yours? Or perhaps just the ‘touch’ is all I can bear at the moment, not the entire catalogue of what was ‘you’. Or maybe some of the ‘you’ is fading over time, but not the ‘touch’. I still have the ‘touch’. I won’t let that go.

The text is taken from D.H. Lawrence’s novel, Lady Chatterley’s Lover. When asked about her dead husband, the widowed maid of Constance Chatterley replies that it is the touch of him she misses most; ‘It is the thing about him she finds hardest to remember yet hardest to give up.’[1] In these strange COVID times, touch is missing, lost not to death, but to distance. At one point at the start of the pandemic, the rumour was that mothers were not being permitted to hold their just born children in hospital; a horrific thought. Happily, I have seen plenty of exhausted but elated mothers cuddling tiny bundles on social media to know that this isn’t so. To deny a mother to touch her new-born is unimaginable. Of course, even before the pandemic, there were plenty who no longer had access to human touch; the isolated, the aged, the ill, the abandoned. Suddenly, however, it became a new way of life for everyone and not one we have come to accept easily. We have all heard or expressed the laments, ‘I just want to hug all my friends’; ‘waving to grandchildren over a screen is no substitute’. We want the real thing. The memory of a touch, of your touch, is simultaneously something to be treasured and a painful reminder of absence.

The nurseries in my area have started to reopen. This morning, I was walking behind a mother and her little girl when the child noticed that her friend was across the street. She started shouting and waving wildly, ‘Hi, Bea, Hi, Bea, Hi, Bea’ over and over and over again. I don’t think it was just the excitement of seeing a friend that made her repeat herself, but a need, after all this time, to reassure herself on an immediate level, that she was in fact really seeing Bea across the way. Bea didn’t shout back. Instead, she stood gazing steadily back at her friend, her head held shyly to one side, letting her little schoolbag fall to the ground. How beautiful to be that missed, that loved. Eventually, the first pair crossed the road to join the queue at the nursery door. The little girls flew into each other’s arms, rocking back and forth.  Watching them I felt my own sense of longing. I too want embodied reunions with those I love, those I miss. In the meantime, I have the memory of your touch. I won’t forget.